On a recent school visit, I came upon a school where students were walking around talking to friends, sitting on the floor in small groups, checking in on their social media updates, or just generally not doing much of anything.  This was a high school, and the middle of the day, so the first thing that came to my mind was “recess?” But this was a high school.

It was explained to me that this was something new the administration was trying to lessen the stress level of a student’s day by giving them a half hour with no responsibility, structure (aside from where you could or couldn’t go) or “learning.”  Students were just allowed to “be” for a little while, without being forced to do anything at all.  I understood what the administration was trying to do, and I saw some students actually using the time given, but I saw many others just staring off into nothing, and I could not stifle a feeling of wasted opportunity.  I understand the need for a little time to yourself everyday, believe me.  This time was in addition to lunch, study hall, or any other parts of the day when actual learning or discovery takes a back seat. It was depressing to see so many not utilizing their time in a more beneficial way.  Maybe some would say that staring off into space is beneficial.  I digress.

As I made my way around quiet groups of students and some more vocal ones, I eventually made it to the music rooms.  It was here that my faith in academia and humanity in general was restored.  You see, when given an opportunity, such as a half-hour to themselves, these music students did something interesting.  They were composing; they were twirling flags, they were practicing; they were cleaning their instruments, they worked on sets, and they did most of these things socially with other music students, and seemed relaxed, engaged, and happy.

Whether or not they did this on their own (I would like to believe they were acting independently) or by gentle encouragement from a keen-eyed band director seeing an opportunity, I am not sure.  I thought back to my amazing high school experience-we were lucky enough to have block scheduling-four, 85 minute classes per day, allowing actual science classes to include creation of hypothesis, lab experiment, recording of data, discussion, and conclusions.  Band actually consisted of tuning, warming up, actually playing and working on pieces, and time for sectionals on some days.

If daily school schedules can no longer support block scheduling that allowed more time per class, but limited math and English to different halves of the year, maybe a half hour a day to get to whatever it is that makes you happy is not only a good idea, but imperative to the educational process and growth of our students.  With the amount of social pressures that teenagers face, along with the great demands on their time for school, sports, music, and everything else, I came away from that school hoping that more schools could find time in the day to allow students time to just “be” themselves-whether it involves working on math projects or composing their own music. 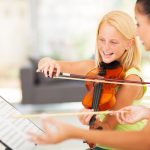 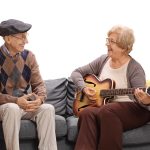 Music moves us beyond dementiaNews