The inventor of the famous Rhodes electric piano, Harold Rhodes, developed a time-proven teaching technique that is unique and comprehensive. His method has helped people around the world realize their dreams of playing the piano.

Rhodes was born in San Fernando, California, in 1910. Growing up, he had interests in both music and architecture. After high school, he started to study architecture at the University of Southern California but in 1929, at the age of 19, he left school and started teaching music to support his family. Early on, he developed his own method for piano instruction that was designed to bridge musical genres.

During World War II, he joined the Army Air Corps, where he gave lessons to fellow servicemen and entertained wounded airmen. To bring a small, portable piano to bedridden patients, in 1942 he built a 29-note keyboard using aluminum tubing from a B-17 bomber. This was a xylophone-like instrument, which he called the Army Air Corps lap model piano. After the war, he founded the Rhodes Piano Corporation, which built a development of this early keyboard, the Pre-Piano.

Following solid success over the next decade, Leo Fender, the electric guitar pioneer, bought Rhodes’s company in 1959 and began manufacturing the Piano Bass, a keyboard instrument with the bottom 32 notes of a piano. Rhodes continued to market the Rhodes Method of teaching piano, and in 1990 – at age 80! – made a video set entitled The Rhodes Piano Method. In 1994 his business partner, Joseph Brandstetter, started teaching the method mainly on the East and West Coasts to students in a variety of schools. This continues today.

Mr. Rhodes died in 2000, 11 days shy of his 90th birthday. He was survived by his wife, Margit, eleven children, nine grandchildren, and his brother John. 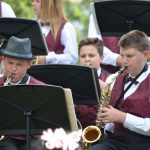